This challenge, hosted by Rose City Reader, looks like a lot of fun, and overlaps nicely with Book Awards IV, The Complete Booker, and The Pulitzer Project.  I’m going to take part in both Battle of the Prizes challenges, which seek to answer the questions:  Does one prize have higher standards than the other? Pick better winners? Provide more reading entertainment or educational value?  Maybe challenge participants will be able to answer these and more questions – maybe they will simply read three great books!

First, the The Battle of the Prizes, British Version: 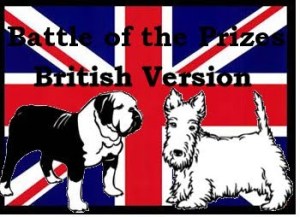 ners of the English Man Booker Prize against winners of the Scottish James Tait Black Memorial Prize in a British Version of the Battle of the Prizes.

For this challenge, I’m doing Option One, and will read three books:

And then there’s The Battle of the Prizes, American Version:

For this challenge, I’m doing Option Two, and will read four books: